Deep Cove, or Deepwater as it was first known, is located in the traditional clamming and fishing area of the Squamish Salish native nation who lived for thousands of years and still live in the area. Spanish and English Naval explorers scouted the arm in the eighteenth century, and by the mid-nineteenth century, whales were being caught and flensed on the Cove's shores.

Deep Cove became a popular summer resort for Vancouver residents in the 1910s, with cabins, logging and granite quarrying featuring in the local history. For many years, the focal point of the community included a yacht club, dance hall and general store.

The population slowly grew in the 1960s and 1970s, when access to the area improved following the completion of the Second Narrows Bridge to Vancouver in 1960. However, Deep Cove held on to its rural feel, and a large, open horse paddock sat adjacent to Gallant Avenue in this period. Today, the Cove remains a popular attraction in the district, drawing visitors from neighbouring Cove Cliff, Dollarton, Parkgate, Indian Arm and Woodlands areas. 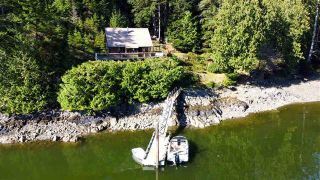